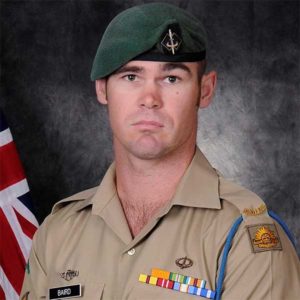 Corporal Baird was a member of the Special Operations Task Group and was from the 2nd Commando Regiment based at Holsworthy Barracks in Sydney, New South Wales.

Corporal Baird is survived by his parents and his brother.

Corporal Baird was born in Burnie, Tasmania, in 1981. He joined the Army in January 2000 and upon completion of his initial employment training was posted to the then 4th Battalion (Commando), Royal Australian Regiment, now the 2nd Commando Regiment, in February 2000.

Corporal Baird was an outstanding special forces soldier. He exemplified what it meant to be a commando, living by the attributes of uncompromising spirit and honour, which in turn earned him the unconditional respect of his fellow commandos. His leadership in action was exemplary, constantly inspiring those around him to achieve greater things. Corporal Baird was an extremely dedicated and disciplined soldier, always striving for excellence in everything he did.

Corporal Baird died how he lived – at the front, giving it his all, without any indecision. He will forever be remembered by his mates and the soldiers he served with in the 2nd Commando Regiment.

Corporal Baird has been awarded the following honours and awards

During Corporal Baird’s service in the Australian Army he deployed on the following operations:

For the most conspicuous acts of valour, extreme devotion to duty and ultimate self-sacrifice at Ghawchak village, Uruzgan province, Afghanistan, as a Commando Team Commander in Special Operations Task Group on Operation SLIPPER.

Corporal Cameron Baird enlisted in the Australian Regular Army in 2000, was discharged in 2004, and re-enlisted in 2006. In both periods of service, he was assigned to the 4th Battalion, Royal Australian Regiment (Commando). His operational service includes Operations TANAGER, FALCONER, BASTILLE and five tours on Operation SLIPPER. He was awarded the Medal for Gallantry for his service in Afghanistan in 2007-08.

On 22 June 2013, a Commando Platoon of the Special Operations Task Group, with partners from the Afghan National Security Forces, conducted a helicopter assault into Ghawchak village, Uruzgan province, in order to attack an insurgent network deep within enemy-held territory. Shortly after insertion, Corporal Baird’s team was engaged by small arms fire from several enemy positions. Corporal Baird quickly seized the initiative, leading his team to neutralise the positions, killing six enemy combatants and enabling the assault to continue.

Soon afterwards, an adjacent Special Operations Task Group team came under heavy enemy fire, resulting in its commander being seriously wounded. Without hesitation, Corporal Baird led his team to provide support. En route, he and his team were engaged by rifle and machine gun fire from prepared enemy positions. With complete disregard for his own safety, Corporal Baird charged towards the enemy positions, supported by his team. On nearing the positions, he and his team were engaged by additional enemy on their flank. Instinctively, Corporal Baird neutralised the new threat with grenades and rifle fire, enabling his team to close with the prepared position. With the prepared position now isolated, Corporal Baird manoeuvred and was engaged by enemy machine gun fire, the bullets striking the ground around him. Displaying great valour, he drew the fire, moved to cover, and suppressed the enemy machine gun position. This action enabled his team to close on the entrance to the prepared position, thus regaining the initiative.

On three separate occasions Corporal Baird charged an enemy-held building within the prepared compound. On the first occasion he charged the door to the building, followed by another team member. Despite being totally exposed and immediately engaged by enemy fire, Corporal Baird pushed forward while firing into the building. Now in the closest proximity to the enemy, he was forced to withdraw when his rifle ceased to function. On rectifying his rifle stoppage, and reallocating remaining ammunition within his team, Corporal Baird again advanced towards the door of the building, once more under heavy fire. He engaged the enemy through the door but was unable to suppress the position and took cover to reload. For a third time, Corporal Baird selflessly drew enemy fire away from his team and assaulted the doorway. Enemy fire was seen to strike the ground and compound walls around Corporal Baird, before visibility was obscured by dust and smoke. In this third attempt, the enemy was neutralised and the advantage was regained, but Corporal Baird was killed in the effort.

Corporal Baird’s acts of valour and self-sacrifice regained the initiative and preserved the lives of his team members. His actions were of the highest order and in keeping with the finest traditions of the Australian Army and the Australian Defence Force.

For gallantry in action during close quarters combat in Afghanistan on Operation SLIPPER.

Lance Corporal Cameron Stewart Baird was part of a Commando Company mission assigned for clearance and search of a Taliban stronghold in November 2007. During the initial phase of the clearance, Lance Corporal Baird’s Platoon came under heavy fire and during the ensuing close-range fire-fight, a member of his team was mortally wounded. Displaying complete disregard for his own safety, Lance Corporal Baird led other members of his team forward under heavy fire from machine guns and assault rifles to recover the wounded team member back to a position of cover.

Throughout the action, Lance Corporal Baird displayed conspicuous gallantry, composure and superior leadership under fire. He was personally responsible for killing several enemy combatants during the clearance, ensuring the momentum of the assault was maintained, and undoubtedly preventing further members of his section from becoming casualties. His performance and his actions were of the highest order and were in the finest traditions of the Australian Army and the Australian Defence Force.

Defence releases the following statement on behalf of the family of Corporal Cameron Baird.

The family of Corporal Cameron S Baird, VC, MG, would like to thank everyone for the overwhelming support, and condolences that they have received during this time of grief. The support received from family, friends, the 2nd Commando Regiment, the Australian Defence Force and Australian Football League has been deeply appreciated. They wish to thank everyone for respecting their privacy during this time.

Our dear Cameron, who was also known as Cam/Baird, loved his family, the 2nd Commando Regiment and serving in the Australian Army, but it was only one part of what made the man.

Cameron was born in Burnie, Tasmania, on 7 June 1981. He moved back to Victoria in late 1984 with his parents and brother. It was while Cameron lived in Victoria that he conducted his primary and secondary education, completing his VCE. It was also during this period, he combined with his schooling, his sporting career that included anything with a bat, ball and athletics.

Cam was not one to spend loads of money on extra kit; he was always the one who would demonstrate his professionalism through his actions, utilising issued equipment and always leading from the front to inspire all around him. Everyone always looked up to Cam and everyone would always gravitate to him. He always went to the extreme to ensure that the ones he loved knew they were appreciated and he could always be relied upon to give a helping hand.

Cam was a very humble man and a straight shooter, who told you what he thought but never held a grudge. We never heard Cam say a bad thing about anyone. He had an enormous love for his family which was apparent to all that knew him.

The constant professional with an easygoing personality would be the perfect way to describe Cam. Nothing was a problem for him. Cam lived for the moment and enjoying getting in his Hot Rod of a weekend and going for a drive with his favourite AC/DC track blasting. You would always know when Cam was around, as he had an enormous boisterous laugh that would echo for miles.

It speaks volumes about Cam that he’d reached his ultimate career goal of joining the 2nd Commando Regiment, making it to the rank of Corporal and becoming a Team Commander within the Regiment. He did not ever ask for responsibility nor demand respect, but forged it through his comrades and ability to push through the odds and bring his team out the other side of an operation.

We will miss Cam’s caring, loving and honest ways and he will always be a hero to all of our family.

We would like to extend our heartfelt thanks to Cameron’s friends, relatives, members of his beloved 2nd Commando Regiment brothers, the Australian Defence Force, the AFL and NRL as well as Virgin Australia Airlines and the general public, for the overwhelming amount of cards, flowers, condolences and support.