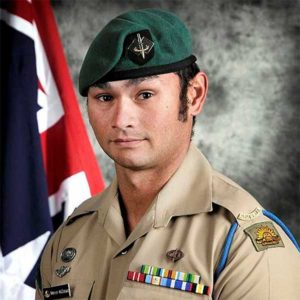 Lance Corporal McDonald was serving with the Special Operations Task Group in Afghanistan when he was tragically killed in a helicopter crash on 30 August 2012 (local time Afghanistan).

Lance Corporal McDonald is survived by his fiancée Rachael, his mother Myrna and stepfather Bernie, and brothers Percy, Roger and Gary.

Lance Corporal McDonald was quick witted and brought a positive energy to both his unit comrades and all those who served with him. A dedicated and enthusiastic professional soldier, he was always willing to come forward with ideas and solutions. He was a highly professional soldier, but his quiet nature and humility meant he always deflected credit back on to fellow members of his Company.

Lance Corporal McDonald has been awarded the following honours and awards:

During Lance Corporal McDonald’s service in the Australian Army, he deployed on the following Operations;

Merv was the warmest guy you’d ever meet. You could see it in his eyes, they had a special sparkle.

He was a real Aussie bloke with a passion for his country, especially its natural splendour. Merv could often be found four-wheel driving and going for bushwalks, but really his favourite place was the ocean. Merv just loved being in the water and the beach was his second home, where he could often be found swimming, spearing or barbequing.

They were simple pleasures which filled his soul.

But no place brought out Merv’s magnificent smile like the west coast of Australia. He had a nomadic childhood in Western Australia and crossing the border into his home state was always a special moment for Merv. His affection for WA was passionately extended to the West Coast Eagles footy club.

Unfortunately Merv’s last visit to Carnarvon a couple of months ago was bittersweet, as he made the trek home to farewell his father who recently passed. What gave Merv strength though was his gratitude to be home and with his family.

Merv was the sort of man who always stayed connected with his family. There was never any doubt of the love he had for them and Merv certainly received plenty of love in return. He was also a fantastic uncle who adored his nieces and nephews. Clowning around with the kids, taking them down the beach and simply throwing a ball around gave him joy.

The other side of Merv was the soldier. He loved the Army and being a digger. Even after several tours, he felt a real sense of duty to return to Afghanistan and he was committed to sharing his experience with his team and 2nd Commando Regiment. Words cannot express just how proud I am of the service he has given his mates and his country. Merv would be deeply touched by how the Army family has rallied around to support those he loved.

When I first met Merv I was struck by his smile. It was a beautiful, illuminating smile that betrayed his tough guy exterior.

Merv had an infectious personality and he was simply amazing, on a natural high and unlike anyone else I’d ever known. He had old fashioned principles and was an absolute gentleman who knew how to treat a lady.

My fiancé changed my world by showing me new ways to think about things and by teaching me how to really experience life and believe in myself. We jammed so much into our 18 months together. Merv never missed a moment. He would stop to look at a rainbow or to smell the coffee.

We were due to be married in Bendigo next Easter Saturday and we were hoping to start a family soon after. Merv would have been a fantastic husband and a wonderful dad.