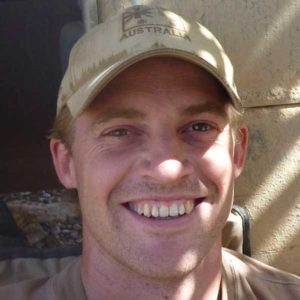 Private Kirby leaves behind his close and loving family, father Gary and mum Dianne, brothers Shaun and Luke, sister Lauren, and former wife Edwina and their two daughters Isabella (10) and Madeleine (eight). Private Kirby’s family is currently receiving support from Army and the Defence Community Organisation during this difficult time.

Private Kirby was born in Nambour, Queensland in 1975. He joined the Army in 2006 and in the same year successfully completed his recruit and infantry basic training prior to being posted to the 6th Battalion, The Royal Australian Regiment.

This was Private Kirby’s first deployment to Afghanistan, although he had deployed previously to East Timor and Iraq.

Private Kirby was qualified as an Assault Pioneer and as a commander and driver of the Protected Mobility Vehicle.

During Private Kirby’s service in the Australian Army, he deployed on the following Operations;

Statement from the family of Private Grant Kirby

The following statement has been released at the request of the family of Private Grant Kirby who, with Private Tomas Dale, was tragically killed in action when an Improvised Explosive Device was detonated while they were on patrol in Afghanistan.

Grant was part of a close and loving family, father Gary and mum Dianne, brothers Shaun and Luke, sister Lauren, and former wife Edwina and their two daughters Isabella (10) and Madeleine (eight).

“While Grant and I were no longer married, he was very much a part of our family,” said Edwina, “he was a dedicated father and my very close friend.”

“Grant was always there for our girls and was totally involved in their sports and school events when he was not deployed.”

Edwina said Grant was an incredibly honourable person who had an immense amount of pride in his job serving the country.

Grant’s father Gary said that his son had always been keen to be in the Army.

“In fact after suffering shin splints in his first attempt to join, he stuck with it and successfully tried again.”

“He was very passionate about health and fitness and kept himself in very good shape,” Gary said.

“Grant was one of the boys,” said his sister Lauren, “and being older was often called ‘Dad’ by the boys in his unit.

“He was a role model at times and often a mentor to them.”

Gary said the family was incredibly proud of Grant and it will take time to come to terms with his loss.  The family would be grateful for privacy to enable them to grieve and will not be making further comment at this time.

The following statement has been released at the request of Ms Jo-Anne Matthews and extended family of Private Grant Kirby.

“Grant was also part of another family with me, his mother, Jo-Anne and my former husband Gavin Matthews, and his other brother, George and wife Belinda and son Nate, and other sister, Amy.

We are all heart-broken and find his death difficult to accept or understand. On their behalf and on behalf of our extended families, we wish to say that we are so very proud of the way Grant carried out his responsibilities in life and of the way he died serving his country.

We send our condolences to Grant’s former wife Edwina and their beautiful girls, Bella and Maddie.

We also wish to express our deepest sympathies for the family and friends of Private Tomas Dale and the other members of the unit.

We would be grateful for privacy at this time to enable us to grieve and come to terms with this loss.”