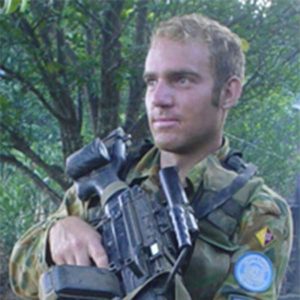 Private Sher was born in South Africa in 1978 and moved to Australia with his family in 1986. He joined the Army in 1998 as an Army Reserve infantryman and deployed to East Timor in 2002. In 2004 he completed the commando selection course and joined the 1st Commando Regiment, going on to complete the suite of Special Forces courses required to become a qualified commando.

For his service in East Timor, Private Sher received the Australian Active Service Medal, the United Nations Transitional Authority in East Timor Medal and the Infantry Combat Badge. Private Sher has also been awarded the Afghanistan Campaign Medal, the NATO Medal with ISAF Clasp, the Australian Defence Medal and the Returned from Active Service Badge.

Private Sher leaves behind his parents, two brothers and a partner, who are currently receiving support from Defence.

Greg’s entire family and his many friends are devastated by his untimely death.

Although the family of any person in the military is aware of the possible risks involved, it is not until the worst happens that you realise the real danger our armed forces personnel face.

Greg, for all who knew him, was a man of purpose and committed determination. He was an extremely positive person with a kind soul.

He was the sort of mate who would do anything for anyone, and his friends knew him for the great guy that he was. He was a loyal and loving family member who always put his family high on his list of priorities.

His decision to serve his country was a true indication of his character. He always wanted to help and be of assistance, and he had this opportunity on a previous deployment to East Timor.

Greg was much admired by his Army colleagues and was seen as a quiet achiever who always got the job done. His mates have described him as the best operator they have ever known.

We wish to take this opportunity to sincerely thank all those who have shown support at this very difficult time.

Most importantly, we ask to be left in peace in order to grieve in private.

“It is with deep regret that I inform you that an Australian soldier has been killed, when Taliban insurgents engaged an Afghan forward operating base with rockets. An Australian element was deployed at the base during the attack. The soldier died as a result of this indirect fire. No other Australian soldiers or other nationals were wounded in this attack,” Air Chief Marshal Houston said.

“To the family, I want to convey that I am terribly sorry for their loss. Though I can bring them no comfort at this time, I do want them to know that they are in the thoughts and prayers of a grateful nation. I will ensure they are provided with caring support as they endure their devastating loss.

“Our troops are well prepared, well trained, well equipped and well led. But the very nature of our work means our men and women will sometimes be in harm’s way. And sadly, sometimes we lose those whom are among our finest and most courageous.

“This soldier died serving our nation. He was experienced, with a previous operational tour in East Timor. He was professional and a great team member, and his actions and service exemplified the spirit and values of the Australian Army. We should remember his service with much gratitude and respect.

“Despite this tragic loss our operations will continue. And we will not be deterred, nor our resolve lessened, from taking the fight to the Taliban”.