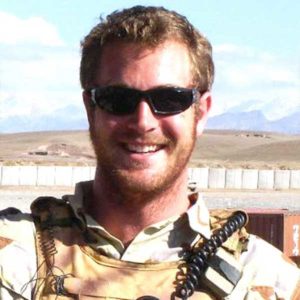 Private Luke Worsley enlisted into the Australian Regular Army on the 23 October 2001. After completing his Recruit Training he was allocated to the Royal Australian Infantry Corps and commenced his Initial Employment Training at Singleton, New South Wales on 15 April 2002.  At the completion of his Initial Employment Training, Luke was posted to the 1st Battalion, The Royal Australian Regiment. During his service with 1 RAR, Luke deployed to East Timor as part of Operation Citadel, providing security to the people of East Timor.

After two years of service with the 1st Battalion, and looking for more of a challenge, Luke applied for selection with the 4th Battalion, (Commando) The Royal Australian Regiment. He was successful in his attempt, and Luke went on to complete the Commando suite of courses, becoming ‘beret’ qualified in 2004.

For his service in East Timor and Afghanistan, Luke was awarded the Australian Defence Medal, the Australian Active Service Medal with clasp East Timor the United Nations Medal with the United Nations Transitional Authority East Timor Ribbon, the International Coalition Against Terrorism Clasp, the Afghanistan Campaign Medal, the Infantry Combat Badge and the Return from Active Service Badge. Luke was also awarded the Unit Citation for Gallantry for his service with the Special Operations Task Group in 2006.

Our family is devastated at the tragic loss of our son, Luke, in Afghanistan.

He was a special service commando in 4RAR and very proud to be a soldier and to be doing his duty.
Though we are devastated at Luke’s loss we know the Army was his chosen profession and we have nothing but the utmost respect for the Army and their support to us.

We are extremely proud of our boy and we know that we lost him doing a job he was trained for and loved doing.

Luke leaves behind a loving mother and father, three sisters and a brother, two brothers-in-law, two nieces, two nephews and a wonderful girl who adored him.

When he was growing up, we would never have thought of Luke as a soldier, but he loved the Army, its discipline, training and spirit. Luke had strength of mind, body, character and will.

The Army was the life Luke wanted and he was happy.

Our son chose his profession and as fate would have it, he paid the ultimate sacrifice.

We’re a private family and would like that privacy to be respected at this difficult time, but we have issued these words because we want people to think of Luke the way we think of him.

This was Private Worsley’s second tour of duty to Afghanistan. He also served in East Timor in 2003 with the 1st Battalion Royal Australian Regiment. He qualified as a commando in 2004 and was part of the 4th Battalion tour of Afghanistan for which 4RAR was awarded a unit citation for gallantry.

He was a greatly respected soldier and will be dearly missed. He was one of our finest. I am told his dedication and enthusiasm for soldiering was an inspiration to all those around him.

On behalf of all the men and women of the Australian Defence Force, our deepest sympathy goes out to the family and the friends of our fallen comrade. Though no words can alleviate their pain at this terrible time I hope the knowledge that they are in the thoughts and prayers of so many Australians will be of comfort to them as they deal with their loss.

The Joint Task Force has been deeply saddened by our loss of Private Luke Worsley, who was killed in action in Afghanistan whilst engaging with Taliban forces.

If there is any solace it is in our knowledge that Luke was a fine soldier and was with his mates at the time of his death.

The thoughts of the Task Force now turn to Luke’s family who must now carry the great burden of sorrow and grief as Luke is returned to them.

Hear AUDIO file of this statement

The soldier stood and faced God,
Which must always come to pass,
He hoped his shoes were shining,
Just as brightly as his brass.

“Step forward now, you soldier,
How shall I deal with you?
Have you always turned the other cheek?
To My Church have you been true?”

The soldier squared his shoulders and
said, “No, Lord, I guess I ain’t,
Because those of us who carry guns,
Can’t always be a saint.

I’ve had to work most Sundays,
And at times my talk was tough,
And sometimes I’ve been violent,
Because the world is awfully rough.

I know I don’t deserve a place
Among the people here,
They never wanted me around,
Except to calm their fears.

If you’ve a place for me here, Lord,
It needn’t be so grand,
I never expected or had too much,
But if you don’t, I’ll understand.”

There was a silence all around the throne,
Where the saints had often trod,
As the soldier waited quietly,
For the judgment of his God.