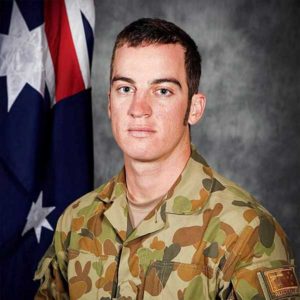 Private Lambert was a member of the Mentoring Task Force – Three and was from the 2nd Battalion, Royal Australian Regiment (2RAR) based in Townsville, North Queensland.

Private Lambert is survived by his partner, parents and family.

Private Lambert was born in Kogarah, NSW in 1985. He joined the Army from southern Queensland enlisting in the 9th Battalion, Royal Queensland Regiment in August 2005, transferring to the Australian Regular Army in February 2007 and posted to 2RAR in Townsville.

Private Lambert is described as a well respected soldier who excelled in any task he was assigned, and was looking forward to serving his country in Afghanistan.

During Private Lambert’s service in the Australian Army he deployed on the following operations:

Statement on behalf of the family of Private Matthew Lambert

Defence releases the following statement on behalf of the family of Private Matthew Lambert.

He is survived by his partner Ellesse, mother Vicki and her partner Gregg, father Chris and his wife Amanda, and his sister Jess.

Matthew was a son both his parents Vicki and Chris were extremely proud of.  He had just bought his first home in Townsville and he loved to take his treasured motorbike for long rides with friends around the area

He was loved very much by all his family and friends and made an impact on anyone who was part of his life.

“He was an inspiration, and for a man there is no greater gift than to have a son like him,” said Chris, Matt’s father.

“He was an extraordinary young man with everything, including incredible physical and mental agility. Matt had a great enthusiasm for living life, generously sharing his time, thoughts and ideas and inspiring us all by walking the talk”.

Matt believed the world could be made a far better place and he had a very positive outlook on life.  He always encouraged and motivated others.

“He was very adventurous and an inspiration to all who met him,” said Vicki, his mother. “Matt was an extremely focussed person who really wanted to help make the lives of other people better.”

Ellesse, said that he was the love of her life, everything she had ever wanted in a partner and no one could ever replace him.

“He was the most special man in my life and we had planned our whole life together.  Matty made me a better person, he is my best friend and I will always love him. Matty always protected me and was the best part of my life, he was my everything”.

Matt and his sister Jess were inseparable. He was her best friend and the big brother who always looked after and protected her. They shared a unique sense of humour and Matt sent his love to Jess in his last message.

We’re spending time together as a family trying to come to terms with Matt’s loss.

We would like to thank all of our friends and Matt’s mates for their support, and ask that our privacy be respected and we be given time to grieve.