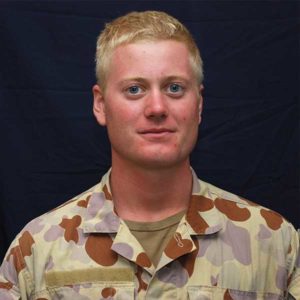 2CER was his first posting as a Combat Engineer. Whilst at 2CER, he went on to complete a number of courses including: Protected Mobility Vehicle Driver course in April 2009 and Combat First Aider in August 2009. His deployment as part of 1st Mentoring Task Force was his first operation, deploying in January this year.

As part of his tour he has been awarded the Australian Active Service Medal with Clasp International Campaign against Terrorism (ICAT), NATO Medal and the Afghanistan Campaign Medal. Along with the awarding of his AASM.

Sapper Moerland leaves behind his fiancéé, Kezia who lives in Brisbane.

Statement from the Moerland family

We would like everyone to know how proud Jacob was to serve his country. Jacob wanted to join the army from an early age and he loved his mates and his job and I have never seen Jacob so happy as during his march out parade.

Jacob died doing the job he loved and he went to Afghanistan not because he had too, but he thought it was a valuable job to help the people in Afghanistan.

I am so proud of my son Jacob. I love him and miss him very much.