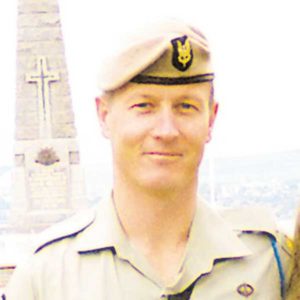 It is with great sadness that the Department of Defence announces the death of Sergeant Andrew Russell, serving with Special Air Service Regiment in Afghanistan on 16 February 2002.

Sergeant Russell was on a patrol when the long-range patrol vehicle in which he was travelling struck a suspected anti-vehicle mine.

During Sergeant Russell’s service in the Australian Army he deployed on the following Operations:

Farewelled by his mates from the Special Forces Task Group from Kandahar Airfield, the 33-year-old fallen soldier is the first Australian military death in action since the Vietnam War more than 30 years ago.

Sgt Russell suffered fatal wounds on 16 February, 2002 when the long-range patrol vehicle in which he was travelling struck a suspected anti-vehicle mine.

He was one of five Australian personnel travelling in the vehicle, but was the only person wounded in the explosion.

Combat Search and Rescue helicopters were launched from Kandahar 13 minutes after the task group headquarters was notified of the incident at 11.58 pm Australian Eastern Summer Time.

Despite the efforts of a three-member US military rescue team, who parachuted into the scene to stabilise him in preparation for evacuation by helicopter, he was pronounced dead after arriving at a United States medical facility in Kandahar.

His death came a month after another mine incident in the region wounded an Australian soldier.
Another Australian soldier, Captain Peter McCarthy, lost his life when his jeep hit a land-mine while serving with the United Nations in Lebanon in 1988.

Chief of Army Lieutenant-General Peter Cosgrove, who announced the loss of Sgt Russell on Sunday 17 February, said the incident was a tragic loss of life.

“It’s a very sad day. Our hearts go out to his loved ones. We all mourn the death of a good and brave soldier,” he said.

“Our soldiers over there have been working extraordinarily hard removing the instruments of terror and war.”

Lieutenant-General Cosgrove said arms caches and military equipment, left behind in abundance, were focal points where mines were placed by evil people.

“Obviously it’s the duty of our soldiers – and one they’ve done particularly well – to try and rid that battered country of some of these depots of weapons.”

“It indicates how dangerous is the mission on which our servicemen are embarked. It is a sad and awful reminder of the great risks that the men and women of the ADF undertake,” he said.

“It also underlines the level of commitment of the men and women who choose to serve their nation through the Australian Defence Force,” he said.

“I would like to express my deepest sympathies and the sympathies of the Australian Government to the deceased soldier’s family.

“This soldier has given his life in the service of his country as part of the global effort to make the world a safer place from the threat of terrorism.

“I would also like to acknowledge the efforts of the soldier’s colleagues in their attempts to save his life in these difficult circumstances. The Australian Government also appreciates the efforts of the United States medical personnel who gave assistance to our forces.”

Federal Opposition Leader Simon Crean said the tragedy reminded Australians of the risks accepted by people of the ADF.

“[His death] reminds us all of the enormous debt that we owe the men and women who serve in our armed forces. Our prayers go out to other Australians on active duty.”

Sergeant Russell is survived by his wife Kylie and baby daughter Leisa.

His family are receiving ongoing support through Defence Community Organisation and SASR.