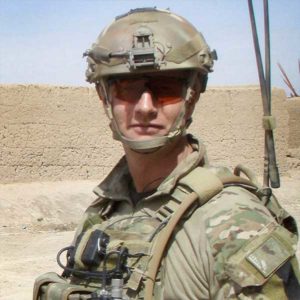 Sergeant Diddams is survived by his wife Toni-Ann, their daughter Elle-Lou and son Henry, his parents Peter and Cate, and siblings Nikki, Sian, Christian and Luke.

Sergeant Diddams was born in Canberra, ACT, in 1971. He enlisted in the Army on 24 April 1990 and after completing his initial employment training for infantry was posted to the 1st Battalion, Royal Australian Regiment in Townsville, Queensland on 2 November 1990. Sergeant Diddams successfully completed his SASR selection course and was posted to the Regiment in 1995

This was his seventh tour to Afghanistan since 2001, although he had deployed previously on four occasions to Somalia, East Timor and the Solomon Islands.

Sergeant Diddams, ‘Didds’ to his mates, was a devoted family man and a dedicated professional soldier. Known for his outwards personality and quirky sense of humour, he was held in the highest regard by his mates and comrades alike.

Sergeant Diddams has been awarded the following honours and awards:

During Sergeant Diddams’ service in the Australian Army he deployed on the following Operations:

Statement on behalf of the family of Sergeant Blaine Diddams

Defence releases the following statement on behalf of Mrs Toni-Ann Diddams, wife of Sergeant Blaine Diddams, and their children Elle-Lou and Henry.

Didds passed away on 2 July 2012 in a place very foreign to most of us, surrounded by his mates, and doing what he truly loved. He was without doubt a “hard hitter”.

Given how he passed it would be easy to define him as just a soldier, but to those that knew him he was so much more. Didds was the most loving of husbands and a devoted and very proud father to our children, Elle-Lou and Henry. Whenever he could, he loved watching the kids play sport and taught them at a very young age to ski. Skiing was a passion for Didds and each year our family would take a ski trip together come hell or high water! We will look back at these holidays and cherish the moments we shared with Didds.

Friends and family were so very important to Didds. His mates really became members of our family, and I know just how hard his loss is for them also. In this difficult time the support they have shown to the children and I has been unwavering. Didds was a man who stood by his mates no matter what and I know he will be sorely missed and well remembered by them all. The men he stood side by side with in the SASR were his brothers in every sense of the word.

He lived his life to the fullest, his enthusiasm and humour were utterly infectious, if you were around Didds you were having a good time. Everyone has a ‘Didds story’.

Family Statement on behalf of Peter and Cate Diddams

The following statement is released at the request of Peter and Cate Diddams, the parents of Sergeant Blaine Diddams, who was tragically killed on operational service with the Special Operations Task Group in Afghanistan, on Monday 2 July 2012.

Today we lay to rest our eldest son Blaine, who died doing what he loved, what he believed in, in the company of those with whom he shared a special bond.

To Blaine he couldn’t imagine doing anything else, he was living his dream and living it with pride and distinction.

Whilst we are devastated at his loss, we lovingly remember the man who was absolutely focused and driven to be the best he could be in everything he pursued, yet always with that wonderful sense of humour, boundless enthusiasm and perspective that will be sorely missed.

Blaine was totally devoted to his wife and children, to his extended family, and unreservedly dedicated to his mates and to his country.

Blaine’s brothers and sisters all looked up to him as their hero long before he became a national hero.

Our grief has been tempered by the overwhelming expressions of sympathy and support we have received, and we are steeled to face the difficult days ahead by the knowledge that we do not grieve alone.

We would like to thank the Australian Defence Force for their efforts in supporting us through this traumatic time, and in particular the regimental family of the Special Air Service Regiment – the military family Blaine loved so much, and whose support has been unstinting.

Finally we ask that out of respect for Blaine and in recognition of the ultimate sacrifice he has made for his country, you grant his family and friends complete privacy as we all come to terms with his loss.