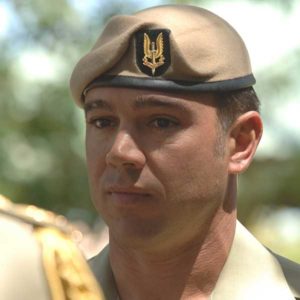 Sergeant Locke was on a patrol when fatally wounded by small arms fire from Taliban extremists.
Sergeant Locke was involved in Operation Spin Ghar, which directly supported an International Security Assistance Force (ISAF) and Afghan National Security Forces operation to target and clear Taliban extremists from the area around Tarin Kot, in Uruzgan province.

Defence extends its sympathies to Sergeant Locke’s family and continues to provide support to them during this difficult time.

Biography:
Sergeant Matthew Locke enlisted into the Australian Regular Army on the 11 June, 1991.  After he completed his Recruit Training at Kapooka, he was allocated to the Royal Australian Infantry Corps and commenced his Initial Employment Training at Singleton, New South Wales on the 10 September 1991.  At the completion of his Initial Employment Training, Matthew was posted to the 5th/7th Battalion, The Royal Australian Regiment.

Matthew had a flair for Infantry training and whilst at the 5th/7th Battalion, The Royal Australian Regiment, he completed Driver Courses, Basic Mortar Course, promotion courses and became a Small Arms Coach.

During Sergeant Locke’s service in the Australian Army he deployed on the following Operations:

The medal citation read: For gallantry in action in hazardous circumstances as the second-in-command of a Special Air Service Regiment patrol in the Special Forces Task Group whilst deployed on Operation Slipper, Afghanistan, in 2006.

During the conduct of an operation, a patrol, with Sergeant Locke as second-in-command, were tasked with establishing an Observation Post in extremely rugged terrain over looking an Anti-Coalition Militia sanctuary. After an arduous 10 hour foot-infiltration up the side of the mountain, the patrol was called into action to support elements of the Combined Task Force Special Forces patrol that were in contact with the Anti-Coalition Militia in the valley floor to their north. After the engagement, Sergeant Locke’s patrol remained in their location and was the only coalition ground element with visibility of the target area.

During the course of the next day the patrol continued to coordinate offensive air support against identified Anti-Coalition Militia positions in order to further disrupt and degrade the enemy’s morale.

Sergeant Locke’s actions of gallantry whilst under enemy fire in extremely hazardous circumstances, displayed courage of the highest order and is in keeping with the finest traditions of Special Operations Command-Australia, the Australian Army and the Australian Defence Force.

Chief of Defence Force, Air Chief Marshal Angus Houstson:
Sergeant Matthew Locke was everything you would expect of an Australian soldier. He was courageous, dedicated and very professional.  He took great pride in being an Aussie digger, displaying the characteristics of loyalty, mateship and determination for which Australian soldiers are renowned.

Sergeant Locke died whilst working with our coalition partners and Afghan forces to drive the Taliban from their sanctuaries and create an enduring security presence in the area. Operation ‘Spin Ghar’ was to target and clear Taliban from the area around Tarin Kot in Uruzgan Province.

Sergeant Locke had extensive operational experience in East Timor, Iraq and Afghanistan and was one of the finest soldiers in the Australian Army.

Sergeant Locke will be greatly missed by his brothers in arms.  He was admired and respected by all who served with him.  His energy, enthusiasm and sense of humour made him a popular figure in the Special Air Service Regiment.

In 2006, his courage was recognised with a Medal of Gallantry, one of the Australian Defence Force’s highest honours.  With complete disregard for his own safety, Sergeant Locke braved heavy enemy fire to neutralise the Taliban advancing on the Australian position and in doing so saved the lives of his mates.  His courage on that day was but one example of the extraordinary valour we have come to expect from the Special Air Service.

Our thoughts and support go out to his family, friends, and his colleagues in the Special Operations Task Group, and Special Air Service Regiment, all of whom are affected by his death.

Our immediate focus and priority is the care and comfort of Matthew’s family during this difficult period.

Sergeant Locke’s sacrifice and legacy will endure and he will not be forgotten.

Governor-General of Australia Major General Michael Jeffery:
Sergeant Locke, from my observations, was a magnificent soldier.  He was brave, he was an absolute professional, but he also had a wonderful sense of humour and was very compassionate and I know that he will be missed, not just by his patrol, but also by the whole regiment.

Sergeant Locke was doing what he loved doing, that is commanding the best soldiers in the world in operations, in which he did so supremely well.  Many of us would like to thank, and I certainly do, that with 42 other special force soldiers who have lost their lives, he is now in a place of peace and tranquillity and hopefully with an internal dimension.

Chief of Army Lieutenant General Peter Leahy:
The nation has lost a genuine hero.  The Army has lost a gallant and respected soldier.  Our Special Air Service Regiment has lost a comrade and a mate.

Sergeant Locke was a great soldier; one of those inspirational leaders who knew his duty and knew his task and it’s a very sad day that the nation has lost a man of this calibre.