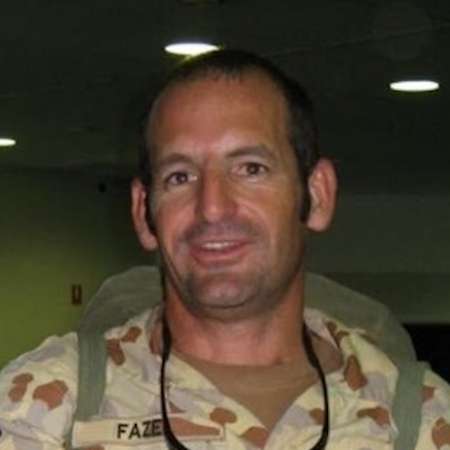 Steven Jeffrey Fazel was born in Townsville on 6th April 1970 and grew up in a loving family. He gained a Bachelor of Commerce degree and was a talented sportsman, representing Townsville, Queensland Country and Australian Country in hockey.

At 25 years of age, he joined the Army to become a helicopter pilot where he flew the Kiowa and Chinook helicopters including during seven operational deployments of Timor Leste and Afghanistan.

In 2003 Steve was awarded a Force Commander’s Commendation for outstanding service to the Peacekeeping Force for the UN Mission in Support of East Timor. Then, following his 2008 deployment to Afghanistan, he was also awarded the USA Air Medal for his courage and commitment to mission accomplishment under extreme circumstances.

Below is a tribute written by his Commanding Officer in Afghanistan and a poem by his brother Kerry.

“It is not the critic who counts; not the man who points out how the strong man stumbles, or where the doer of deeds could have done them better.

The credit belongs to the man who is actually in the arena, whose face is marred by dust and sweat and blood; who strives valiantly; who errs, who comes short again and again, because there is no effort without error and shortcoming; but who does actually strive to do the deeds; who knows great enthusiasms, the great devotions; who spends himself in a worthy cause; who at the best knows in the end the triumph of high achievement, and who at the worst, if he fails, at least fails while daring greatly, so that his place shall never be with those cold and timid souls who neither know victory nor defeat.”

Most people have read these words at some stage in their life, first penned by Theodore Roosevelt in 1910, and on reflection, this was Faz. To the letter.

Steve Fazel was in the arena, he was a combat aviator, a warrior. However, he wasn’t seeking war per-se. Rather, Faz was seeking to serve. To serve the men and women on the ground, to serve those beside him in the air, and indeed to serve our nation as a whole.

Faz lived to the full. Always there to share or create a laugh, first in line to be trained, pack, prepare, debrief, contribute, but perhaps not the neatest or regimented of officers you’ve ever come across.

In Afghanistan in early 2006 Faz was the aircraft captain to recover an Australian Special Forces vehicle that had struck an IED, but only part of the IED had detonated. Despite the area not being secured and the IED starting to fizz again during the recovery, he did a great job getting the vehicle back to TK.

One night we conducted a resup into the Baluchi Valley. Troops were in contact just a few hundred meters away and the AC-130 was engaging targets in the area with – ‘crump, crump, crump’ being heard and felt behind us as we sat on the LZ. Faz was itching to do more. Not out of ego or bravado, but from a genuine desire to help those on the ground, however, it wasn’t our fight that night.

Finally, the day came for our first higher risk ‘Direct Action’ task and Faz was on the crew, scheduled for the 6th of June. So, as we were standing in the ops room of the US Taskforce being briefed by their CO for the critical timing for landing, Faz pipes up ‘Hey boss, do you reckon we could make it 6:06? ‘What the?’… was the response from the American and from me (standing right next to Faz). He said, ‘C’mon! It’s the 6th of the 6th, 2006 – it’s the number of the beast! Can’t we line up the timing for 6:06 as well?’ Plenty found it funny, except, Steve was serious! After his second attempt though, he knew it wasn’t going to happen!

But, it wasn’t only in the air where Faz made an impact. He was regularly part of the crowd no matter how big or small heading to the boardwalk for a feed or to Greenbeans for a coffee.

Calming the nerves after a job with a morning coffee and cigar whilst watching the sun come up was not uncommon. You could count on Faz being part of it. Talking through the task with running commentary is sure to lift everyone’s mood and get the laughter flowing.

You could walk to Greenbeans, but it was preferred to drive. That was if I could get a lift of course. You see, put Scooter and Faz together and they took great delight in driving off every time I got close to the passenger door. Splitting their sides laughing.

Towards the end of our time in 2007, a few of us were halfway to the DFAC for dinner when we heard the whistle of another incoming. A single rocket was flying overhead towards Camp Baker and as we looked toward the camp, it hit. Boom! Faz said “Fuck it hit our place” and we were off running. Some minor injuries but nothing serious. It was a miracle miss. Faz was in the thick of ensuring everyone was okay and then making sure everyone was laughing at our good fortune. Of course, I was last in the race back to the camp and got paid out by Faz big time for being so bloody slow!

Then at the official end of the mission, Faz paid me perhaps the biggest compliment anyone could ask for. I was still in Kandahar and he had already rotated home. He rang me to thank me for what I’d done personally, what we’d all done collectively and telling me how much he appreciated it.

Let me tell you, the appreciation was mine. The privilege was mine. All mine. To serve with people like Faz makes it all worthwhile. Some may think on occasion that he was cut from a different cloth, but it’s a cloth I’ll forever cherish. He made me laugh when it seemed impossible to do so. He took on tasks when others shied away. He helped me understand that we are all human with unique dreams and fears.

We all have a choice in how we will remember him. I will remember Steven Jeffrey Fazel as the man in the arena. A loveable rogue of unwavering loyalty. A great pilot and friend ever ready to lend a hand.

Rest in Peace Faz, your duty is done mate and we can’t thank you enough for it.

When The Black Dog Comes A Calling.

Wandering through life there can be many highs and lows.
We often find that speed humps will be with us where we go.
But many times the bumpy roads will eventually even out.
That is, unless, you live your life with endless fear and doubt.

Some people handle pressure by just talking to a friend.
It helps them to relieve the pain, get on with life again.
But when despair takes a hold of you, and it seems your world is falling.
It’s at that time, in your life, when the Black Dog comes a calling.

The Black Dog is a mongrel breed that sinks his teeth in hard.
He’ll take you on a horror run, and leave no calling card.
You often think he’s come to stay, impossible to shake.
And he’s always nipping at your mind if you’re asleep or you’re awake.

To break his stubborn hold on you takes a lot of courage and strength.
It takes the support of those you love, both family and your friends.
There’s times you feel that nothing works, that nothing can be done.
But look for help from those who know, you’re not the only one.

Some people seem to go through life with very little stress.
Others fight a constant battle, their life can be a mess.
The only thing that I can say, to keep your world from falling.
Is go and seek professional help before the Black Dog comes a Calling.

By Kerry Fazel
In honour of Steve (Faz) Fazel
Gone but never forgotten!!