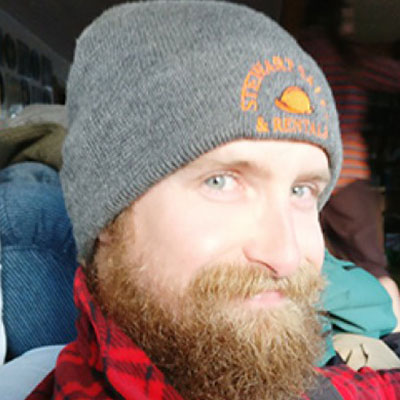 David was born July 18, 1988, in Brisbane, Australia to Lisa Ann (Vitnell) Rowe. David served in the 1st Regiment of the Royal Australian Artillery from 2006- 2012. During his military career, he deployed to Afghanistan as a Gunner on the Reconstruction Task Force. He rose to the rank of Lance Bombardier, being awarded the Australian Active Service Medal, Australian Defence Medal, Afghanistan Campaign Medal & NATO Service Medal. As well as the Army Combat Badge. David was an exceptionally proficient soldier, respected and valued by his unit. David also pursued many trades following his military career. David came to Canada in 2016 and settled into a life he loved living in Golden, BC. David married his wife, Jessica Stewart, on October 7, 2018, at Emerald Lake, one of the first spots they went to on a date – fittingly outdoors and amongst the beauty of the mountains.

David was an outdoorsman. He loved the wilderness, the mountains, and everything those two involved. David had an infectious smile, and cheeky laugh when he would tell his unbelievably corny jokes. David loved snowboarding – you could always find him doing a jib lap.

David is preceded in death by his father, David Rowe, and his brother, Jai Lazzaro. He is survived by loving dog, River; mother, Lisa Rowe; brother, Cain Lazzaro; many aunts, uncles, cousins, and in-laws. He is also survived by his incredible community of friends that span continents.

A Celebration of Life was held on Friday, January 24th at the Confluence of the River in Golden, BC, at 2 pm.

Thinking of you always and missing you forever. We love you.