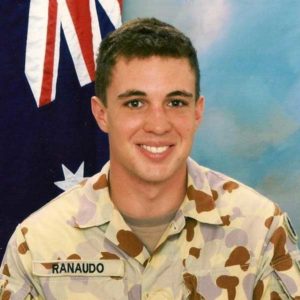 Private Ranaudo was 22-years-old and leaves behind a loving family who are currently receiving support from Defence representatives.

Chief of the Defence Force, Air Chief Marshal Angus Houston, extended his deepest condolences to the family and friends of Private Ranaudo.

“Our hearts go out to Benjamin’s family during this very sad time. We will do everything we can to support them as they deal with their terrible loss.”

“Private Benjamin Ranaudo was a professional soldier who served enthusiastically and with distinction. His career record speaks to a young man, very well trained, with an extraordinary array of completed courses. Benjamin was clearly dedicated to his career as a soldier and committed to the profession of arms. He died ensuring that terrorist groups do not have Afghanistan as a base from which they can plan and mount attacks,” said Air Chief Marshal Houston.

Chief of Army, Lieutenant General Ken Gillespie, extended his condolences to the family and friends of Private Ranaudo.

“Our hearts go out to Benjamin’s family during this very sad time. I hope the knowledge that they are in the thoughts and prayers of so many Australians will be a source of comfort for them.

“Private Ranaudo died while serving his nation and his sacrifice will never be forgotten.  This loss is felt heavily by the wider Defence community, and particularly by members of the Australian Army,” said Lieutenant General Gillespie

Private Benjamin Ranaudo enlisted into the Australian Regular Army on the 19th of May 2006. After completing his Recruit Training he was allocated to the Royal Australian Infantry Corps and commenced his Initial Employment Training at Singleton, New South Wales. At the completion of his Initial Employment Training in Nov 2006, Private Ranaudo was posted to the 1st Battalion, The Royal Australian Regiment. During his service with 1 RAR, Private Ranaudo deployed to East Timor as part of Operation Astute, and to Afghanistan as part of Operation Slipper.

After returning from East Timor in October 2007, Private Ranaudo completed the 1 RAR Basic Reconnaissance course and was posted to Reconnaissance Platoon in May 2008. As part of lead up training for Afghanistan in late 2008, Private Ranaudo completed a Combat First Aider course and a Protected Mobility Vehicle Drivers course. He deployed as a Rifleman with 2 Platoon, Combat Team A for Operation Slipper.

Personal statement released on behalf of the parents of Private Ranaudo

Firstly we would like to say how proud we are of our son. Benjamin was a proud solider. He believed in what he did. It was more than a job it was his passion, his life.

He was a son, a brother, a comrade, a life partner. His smile could light up the darkest of days. Ben touched the lives of so many with his warm heart. His strong spirit carried his family and friends through his absence and it will carry them through their loss.

Our heart goes out to the injured solider and his family.

We thank the nation for your kind words and condolences. The response has been overwhelming.

We would also like to thank the Defence Force for their support in our time of need; they have been both professional and compassionate.

To Benjamin’s comrades, our support is with you. You have lost a friend and a brother. You are all in our hearts.

We send our support and prayers to all the men and women serving here and overseas keeping our country safe.

Please let’s not let Benjamin’s death, and the death of the other 10 soldiers be in vain.