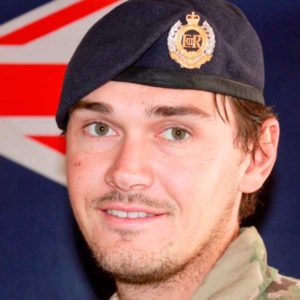 Corporal Smith is survived by his partner Liv, his parents Katrina Paterson and Murray Smith and sister Roxanne.

Scott Smith was born in the Barossa Valley South Australia in 1988.  He joined the Army in February 2006 and upon completion of his initial employment training, was posted to the 1st Combat Engineer Regiment, Darwin.  In 2008, Corporal Smith was posted to the then Incident Response Regiment as a search operator.

Corporal Smith was an exceptional soldier who possessed all the qualities and charisma of a great junior leader. He is described by his unit as a genuine, honest and dedicated member who was probably one of the best Junior Non-Commissioned Officers that the unit has seen. His loss will be deeply felt.

Corporal Smith has been awarded the following honours and awards:

During Corporal Smith’s service in the Australian Army he deployed on the following operations:

Statement from the family of Corporal Scott James Smith

Defence releases the following statement on behalf of the family of Corporal Scott James Smith.

Scott was a tremendous soldier. It is openly acknowledged that he was well respected within his workplace and by those who knew him.

We knew the Army was Scott’s second family, his home away from home. Scott truly believed his actions made a difference; he was a truly dedicated soldier, who also knew how to relax in his time away from work.

Scott lived life to the fullest. He was born in the Barossa Valley and was water skiing as soon as he could stand – it was one of his great loves.

Scott attended school in the local area and used his school holidays to learn to barefoot water ski.

Liv, Scott’s German princess, met him when she was an exchange student in Australia. After that, the pair could be found in all sorts of mischief together.

Scott loved being outdoors and keeping fit throughout his lifetime and pursued many sports – from long distance running, to cricket and any sort of competition he could be involved in.

Scott had a great sense of humour and was very much into practical jokes. He could also be very relaxed when not at work – becoming renowned for his cheeky smile and kind words.  But mostly Scott will always be renowned for being the loveable character that held the family together.

Scott had a lot of time for those who had time for him, and his generosity in all things was often spoken about. One of the things you could rely on Scott for was calling whenever he was able and was thinking of you, at midday, midnight, or anywhere in between.

Scott had a larrikin charm that endeared him to all those around him, and these qualities ensure he will always be held in the hearts of those who knew him.

Our family is united in grief as we try to come to terms with our loss.

We thank everyone for their heartfelt wishes and messages of condolences, but ask that our privacy be respected during this difficult time.