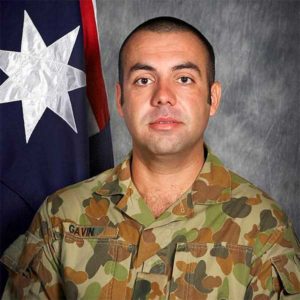 Lance Corporal Luke Gavin was a member of the Mentoring Task Force—Three and was from the 2nd Battalion, Royal Australian Regiment (2RAR) based in Townsville, North Queensland.

Lance Corporal Gavin is survived by his wife and their three children.

Lance Corporal Gavin was born in Manly, NSW, in 1982. He enlisted in the Army in 2004. On completion of his basic training and initial employment training he was posted as an infantryman to the 2nd Battalion, the Royal Australian Regiment, in Townsville in 2005. He was promoted to Lance Corporal in January 2009. He was a highly-qualified soldier, having completed specialist training as a combat first aider, Pashtu linguist and infantry support weapons operator.

Lance Corporal Gavin was a highly-respected member of the 2nd Battalion. He was acknowledged by his superiors for his positive attitude and loyalty. His subordinate soldiers were motivated by his professionalism, mateship and outstanding specialist skills. He was also known for being a devoted husband and father.

Lance Corporal Gavin has been awarded the following honours and awards:

During Lance Corporal Gavin’s service in the Australian Army he deployed on the following operations:

Statement on behalf of the family of Lance Corporal Luke Gavin

Defence releases the following statement on behalf of Mrs Gavin.

On Saturday evening we received the most shattering piece of news that anyone could have ever received. My beautiful husband, best friend and father of our children lost his life.

Luke was an amazing man, husband, father, soldier, son and brother. He always did the best thing for his family; he loved his country and truly believed that what Australia was doing in Afghanistan was a worthy cause.

His parents and family are absolutely shattered and loved him so very much.

Luke and I had been together for 12 years and married for three years. We have three beautiful amazing children, Joshua 7, Holly 5 and Olivia 7 months. I can’t explain how we feel except that our hearts are broken.

Luke and our kids were my life. I’m not sure how to live a life without him in it.

We are all so extremely proud of him.

He died doing what he loved and what he believed in.

We will never forget him. We love him now, always and forever and he will live on through our beautiful children.

Media Note: Mrs Gavin requests that her privacy be respected. Mrs Gavin will not be available for media interview.